Although the concept of blockchain is promising, the introduction of the technology is still a long way off as many issues still need solving, according to currency experts.

Speaking at the IPE Conference in Prague, Martijn Vos, managing director of pensions and insurance at Ortec Finance, said he “strongly believed” in the technology.

However, it couldn’t take off until legislation had been put in place before, for example, governance and data gathering could be set up, he argued.

He emphasised that blockchain’s introduction would be a global issue and a matter for central banks’ policy.

In Vos’ opinion, however, currency trading could be one of the first sectors to benefit from blockchain technology, “as its very liquid market would make it easy to record transactions”. The same went for liquid equity trading, he said.

Tibor Gergely, director of FX eCommerce at UniCredit, argued that the technology was ready to enable quick cross-border payments.

In his opinion, the problem was more about which system to adopt, given the multitude of providers. “This needs a critical mass,” he said.

Guy Coughlan, chief risk officer at the UK’s Universities Superannuation Scheme, echoed Vos’s view that the jury was still out concerning how the technology would work in practice and how legislation would develop.

“The real challenge is to convince the financial community to use it, and that the benefits outweigh the risks,” he said, adding that trust, transparency and accountability were crucial.

He noted that he hadn’t noticed significant progress from other new technologies, such as artificial intelligence and robotics, as tools to solve other problems such as engaging with pension savers.

Benjamin Anderegg, head of foreign exchange and gold at the Swiss National Bank, also said that blockchain technology was “very appealing”, but that legislation and proper governance rules would be crucial if it became really important.

He described the introduction of the technology as “a big step” but one that would not be taken soon.

Responding to questions about the rise of bitcoin, Anderegg made clear that the Swiss central bank wasn’t worried “as it doesn’t seem to have an impact on price stability”.

Vos indicated that gauging the impact of the cryptocurrency was complicated “as its drivers were difficult to identify”. 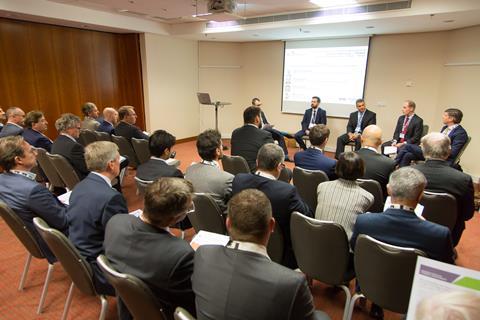