FTSE 100 companies reported an overall pensions surplus for the first time since 2007-08 at the end of last year, according to analysis from consultancy LCP.

There were three main reasons for the increase in funding levels, according to the consultancy: company contributions of £13bn, strong investment growth, and changes in the approach to longevity and discount rate assumptions that largely offset the impact of worsening financial conditions.

A majority of companies were using “increasingly sophisticated” ways to set the discount rate, improving balance sheets by an estimated £15bn over the past two years, said LCP.

The vast majority of FTSE 100 companies reporting at the end of 2017 used a discount rate in the range of 2.4% to 2.6%, according to the consultancy.

Three-quarters of FTSE 100 schemes were using the most recently published life expectancy tables, marking another change in practice. Data from the UK’s Continuous Mortality Investigation last year reported that mortality rates improved by 2.6% a year between 2000 and 2011, but since then improvements have been “close to zero”. 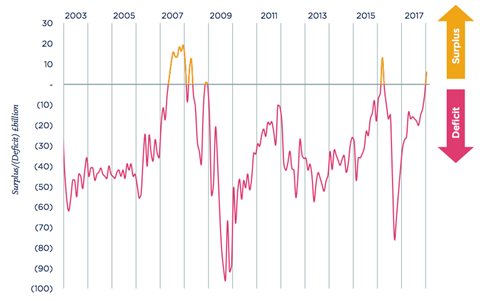 Some companies were also making changes to less well-known accounting assumptions, according to LCP. Retailer Next, for example, reported a change to inflation volatility – “an obscure assumption”, said LCP – which more than doubled its pension surplus.

Company profitability did not appear to be a key determinant of the level of companies’ contributions to pension schemes, according to LCP. This was “despite a somewhat contrary regulatory position,” it said.

FTSE 100 companies paid around £80bn in dividends in 2017, six times the contributions to their UK pension schemes.

The consultancy estimated the companies’ combined pension surplus had increased to more than £20bn at the end of April.

Surpluses to be short-lived?

However, LCP warned that the aggregate accounting surplus might not be here to stay. This was because of “looming” changes to accounting standards (IFRIC 14) that could cause FTSE 100 companies’ balance sheets to worsen by around £50bn overall and “well over” £1bn for some individual companies.

LCP also warned that amendments to international accounting rules for defined benefit schemes (IAS 19) would significantly alter – “in unintuitive and surprising ways” – how some companies accounted for ‘special events’, such as changes to the benefits offered.

Phil Cuddeford, LCP partner and lead author of the report, said: “It is essential that corporate sponsors don’t think they’re out of the woods just yet. History has proven that such accounting surpluses can quickly be wiped out by deteriorating market and economic conditions.”

Significant pension deficits remained on the funding basis that trustees typically used, he added, and “if balance sheet accounting changes go ahead as feared, the FTSE 100 [companies] are likely in for a nasty shock”.

Nearly all FTSE 100 companies have a pension deficit on an insurance buyout basis, noted LCP, and for over a third this was material compared with their market capitalisation. 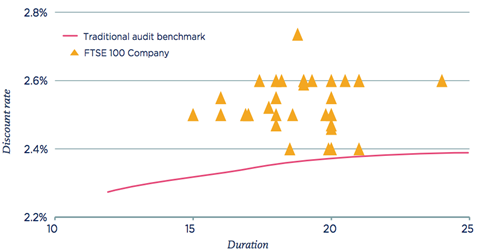