Concerns are growing that US president Donald Trump seems ready and willing to instigate a global trade war that could have a calamitous impact on future global prosperity.

As the Bank for International Settlements (BIS) states in its recent annual economic report, an escalation of protectionist measures could be “a possible trigger of an economic slowdown or downturn”. The impact could be significant, if such an escalation is seen to threaten the open multilateral trading system.

That may not be the only threat to future prosperity. The BIS suggests that, post the financial crisis, it is time to take advantage of current favourable conditions “to put in place a more balanced policy mix to promote a sustainable expansion”. However, as the BIS warns, the path ahead is a narrow one.

President Trump’s election coincided with raised “animal spirits” in the US and a renewed optimism in the corporate sector – it remains to be seen whether or not that mood will persist if the US blunders into a global trade war with both its allies and China.

In the absence of a trade war, for the next couple of years consensus forecasts predict that the trend will continue, marking one of the longest post-war expansions.

The heavy reliance on monetary policy to support the post-crisis recovery clearly has longer-term implications, however. The BIS points out that, post-crisis, the weight of non-bank intermediaries such as asset managers and institutional investors has risen substantially, “and is likely to influence the dynamics of any future episodes of financial stress, in familiar but also some unexpected ways”.

A second possible trigger for an economic slowdown could be a sudden decompression of historically low bond yields, or a “snapback” in core sovereign market yields, notably in the US – this will be discussed further in the September IPE issue.

An inflation surprise and the perception that central banks will have to tighten more than anticipated could be the catalyst. In the US, the risk could be exacerbated by the prospective heavy issuance of government debt, combined with the gradual unwinding of central bank purchases. Given the central role of the US in the global economy, the impact could easily be global in scope.

The third trigger, as outlined by the BIS, could be a more general reversal in risk appetite. There are many possible catalysts for this, including disappointing profits, the drag of the contraction phase of financial cycles where these have turned, a souring of sentiment around emerging markets, or unforeseen political instability in some large economies.

What can policy do to ensure the current expansion is more sustainable and balanced, the BIS asks. Compared to the pre-crisis world, the room for policy manoeuvre has narrowed considerably, so the answers are important. 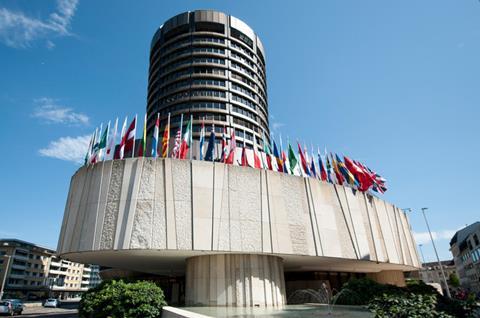 The Bank for International Settlements’ office in Basel, Switzerland

The first line of action suggested by the bank is to redouble efforts to implement structural policies – the only way to raise sustainable growth without generating inflationary pressures. Economies are already operating at or beyond estimates of full employment and potential output, but growth has been disappointing, which the BIS sees as an indication of supply constraints.

The reforms include national governments fostering entrepreneurship and supporting the rapid take-up of innovation, as well as limiting rent-seeking behaviour and promoting the flexible reallocation of production.

This all sounds very good – and European venture capital does appear to be doing better now than it has been for decades – but it is difficult to see what actions can be implemented that will be real game changers.

Perhaps naturally for an international financial institution owned by central banks, the second line of action it recommends is to strengthen the resilience of the financial system, by ensuring banks can be profitable enough to be able to absorb any losses smoothly and swiftly.

However, as the BIS admits, profitability has not only been hit by persistent and unusually low interest rates eating away at banks’ net interest margins, but they are also facing the challenge of growing competition from technology-savvy new entrants.

The BIS’s third recommendation is to ensure the sustainability of public-sector finance and to avoid pro-cyclical fiscal expansions. Public debt has risen to new peacetime highs in both advanced and emerging market economies.

But countries face immense challenges in satisfying this, particularly given the requirement to move back to normal monetary policy and away from the artificial quantitative easing environment, which has itself given rise to many unpleasant side effects.

The BIS must hope that it does not end up like Cassandra, daughter of Priam, the King of Troy in Greek mythology: given the ability to utter prophecies which were true, but then given a curse that she would always be disbelieved.