Deficits at UK pension schemes have not improved as much as expected by the regulator, according to a new assessment.

The Pensions Regulator (TPR) this week published a review of defined benefit (DB) schemes conducting triennial reviews in 2018, and reported that “the deficits have not improved to the extent that would have been expected” between valuations taken at March 2015 and March 2018.

The supervisor used the report to reiterate that scheme sponsors should prioritise deficit contributions over short-term dividend payouts to shareholders.

“Trustees should negotiate robustly with the sponsoring employer to secure a fair deal for the pension scheme, while employers should balance the interests of pension savers with returns to shareholders and investors.”

TPR’s data showed the aggregate deficit of the schemes in its sample had improved “slightly” in the three years to the end of March 2018.

According to an estimate published today from JLT Employee Benefits, the aggregate funding position of UK private sector DB schemes improved to 97% at the end of May. DB schemes attached to FTSE 350 companies were in aggregate 99% funded, JLT said.

Scheme funding proposals are at the heart of a government-sponsored inquiry into the the future of the DB system. Among the plans put forward was the possibility of allowing the Pensions Regulator to set “clearer” funding requirements.

Industry and government experts are currently at loggerheads over a solution, with pension funds, unions and consultants rejecting calls from the regulator and MPs for a more prescriptive approach.

Nathan Long, senior pensions analyst at Hargreaves Lansdown, said the most pressing funding issue for many schemes was the fact that while liabilities have increased, gilt yields have fallen.

“It’s a delicate balance,” he said. “On the one side, you’ve got the fact that you’re a business and you have to pay the salaries and also the pensions of the current employees.

“But on the other, you have this pressure coupled with the fact that you still have promises to keep to people who have worked for the company in the past.”

Despite increases in mainstream asset classes over the past three years, yields on UK gilts have fallen as interest rates have remained stubbornly low, according to market data from FT.com.

“The main thing [for trustees] is to take a long-term view on this,” Long added. 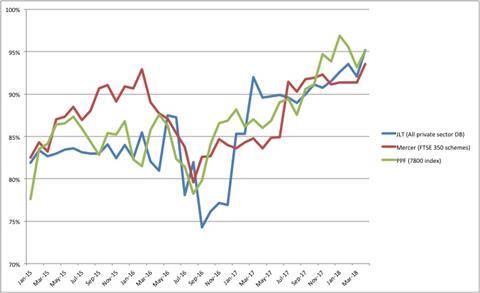