13
Research: The time for action is now
Special Reports

Research: The time for action is now

By Amin Rajan, Anthony CowellTowards Net Zero: COP26 and Beyond

It’s now or never; no ifs, no buts. That is the ‘code red’ warning in the sixth report from the Intergovernmental Panel on Climate Change, published in August 2021.

Under any policy scenario, the private sector is ultimately expected to lead any transition to a low-carbon world. In particular, the global investment industry – professionally managing about $100trn (€86trn) of capital – carries a huge weight of expectation on its shoulders.

The industry is enjoined to play a pivotal role in redirecting capital away from fossil fuels towards renewable energy and innovations that capture CO₂ from fuel combustion or industrial processes at source, or directly from the air.

This capital reallocation process has continued apace, according to the 2021 survey from the Global Sustainable investment Alliance. It shows that sustainable investing held $35.3trn of assets, equivalent to 35.9% of global professionally managed capital. 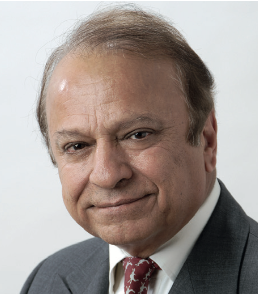 The dollar amount was up 33.4% on the 2018 level, with Canada and the US recording the fastest rise.

Despite all that money in motion, there are widespread concerns that capital markets are not currently pricing in climate risks, while investors continue to target a double bottom line – doing well financially and doing good environmentally.

However, three recent catalytic developments collectively could prove a game changer: COVID-19, which has exposed the uneven balance between humans and their planet; a change in administration in the US with a strong green agenda; and the current COP26 in Glasgow. 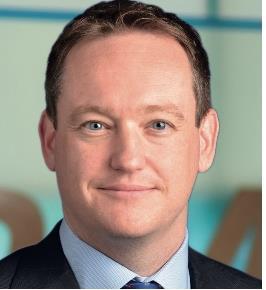 This much is clear from our new report, ‘Can capital markets help to save the planet?’. It is based on structured, in-depth interviews with CEOs, CIOs and senior investment strategists in a cross-section of 90 endowments, pension plans and asset managers who have a collective $34.5trn AUM in 20 investment jurisdictions

Key barriers holding up progress
Our survey respondents have advanced on their climate-investing journey in the fundamental belief that it is essential to look beyond the blind spots that come from short-termism, and detect longer-term risks that are unfamiliar to the conventional risk models based on past price behaviour. As global warming continues, social, human and natural capital will influence economic value creation as much as traditional financial capital does. The fallout from Covid-19 is testament to this.

For example, megatrends such as globalisation and the rise of emerging markets came disguised as continuity. They were hard to spot at the time, but have been hugely consequential in hindsight – such is the case with climate investing. The zeitgeist is shifting.

Capital markets are now at an earlier stage in pricing climate risks in the three broad asset classes (see figure 1). That the process has started is not in doubt.

Progress is more evident in public equities than the rest. The stewardship opportunities they offer are now seen as indispensable to value creation in the transition to a low-carbon future. It is as vital as asset allocation – if not more crucial.

Green bonds have led the advance in the bond space. They provide investors with transparency on the use of proceeds and engagement opportunities usually reserved for equity holders.

In alternatives, progress is evident in infrastructure, real estate and private equity, where custom-built mandates have linked fees with green outcomes.

Yet the majority of respondents believe that capital markets are not pricing in climate risk, implying a misallocation of capital due to market failure and market inefficiency. 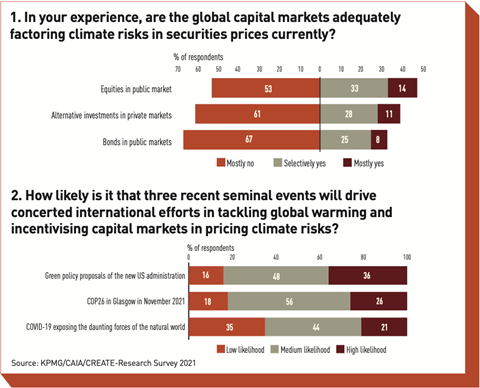 Failure occurs as governments do not penalise unsustainable business practices that do not affect a company’s profit and loss. Inefficiency, in turn, results when markets fail to reward a sustainable company unless and until it delivers tangible bottom-line benefits on its decarbonisation journey based on the current accounting rules.

The first set involves policy inertia. Although governments and regulators recognise that environmental pollution is the biggest negative externality, they have been slow to respond. Since the Paris Agreement, policy measures on carbon pricing – covering taxes and emissions trading based on the principle of ‘let polluters pay’ – have been patchy, signalling virtue rather than value.

As yet, no jurisdiction has set rules that internalise environmental and social costs into  company financial accounts.

The second set of causes centres on the so-called quarterly capitalism. What happens, say, 25 years out seems to fall outside the decision horizon of listed companies, while the incentives and tenures of key players are typically aligned to shorter-term financial targets.

The final set of causes reflects the old refrain: ‘You can’t manage what you don’t measure’. Progress has been slower in creating credible decision-useful public metrics on the impact of climate change on the corporate sector: the vernacular is still developing.

The bottom line is that markets cannot find green direction by themselves. Nor does a green portfolio necessarily equate to a green planet. As hopes have run ahead of expectations, the result has been greenwashing – the repurposing of old funds with a green label as a marketing gimmick.

A greener economy beckons
However, a confluence of three recent catalysts is set to release stronger pricing signals for capital markets (see figure 2).

First, the US has resumed its leadership role in driving global action towards adopting the net-zero carbon target by 2050. The new administration has committed to cut carbon emissions by about a half by 2030 and also eliminate fossil-fuel emissions from the national power grid by 2035.

Its overall package includes some of the most ambitious climate proposals in the world, surpassing China’s much heralded goal of being carbon neutral by 2060, significant though that is.

Importantly, for once, the three largest regions on the climate frontline – China, Europe and the US – are finally aligned. Their combined leverage is set to accelerate and amplify current momentum.

The second catalyst is the UN’s COP26 in Glasgow. Ahead of this, nations have been upping their net-zero targets. Progress is likely on several thorny issues surrounding support for emerging economies and stranded assets – the untapped fossil-fuel reserves to be abandoned in the ground despite their economic potential.

In hindsight, the UN’s efforts to tackle climate change since the 1997 Kyoto Protocol have, at best, come in fits and starts, while global warming has continued unabated.

So far, tackling climate change has been marked by two great leaps. The first one was the Paris Agreement where, for the first time in history, almost every nation came together to agree a set of pre-emptive policy measures to limit the global temperature rise to below 2°C from pre-industrial levels, and to pursue further efforts to limit it to 1.5°C by 2050. COP26 marks the second leap when they have to enhance their nationally determined contributions towards meeting the targets and take the appropriate actions. Hence, COP26 is a moment of reckoning.

Sceptics among our survey respondents have low expectations of COP26. Diplomacy always goes to the wire, they say. It is easy to sign on the dotted line but actions must be louder than words.

Pragmatists, on the other hand, believe that to achieve a concerted global movement, nations have to move more slowly. Desirable as it is to move in lock-step, it would be a miracle to achieve, given the number of countries involved and their conflicting priorities. Besides, governments can no longer afford to prevaricate: better to plan for an orderly transition now than slam the brakes on when it is almost too late. Only time will tell who is right.

The third catalyst is COVID-19. It has been a devastating reminder of the fragility of life on earth. The unprecedented peacetime policy stimulus coming in its wake has strong shades of green.

In the US as well as Europe, governmental interventions sought not only to stimulate the economy after mandated nationwide lockdowns, they also aimed to transform it in preparation for a low-carbon future.

Pricing braced for stronger tailwinds
The three catalysts described above are expected to inspire policy actions that will send out three clear signals helping capital markets advance towards pricing in climate risks on a notable scale over the next three years (see figure 3).

The first positive signal foresees fresh policy momentum from governments and regulators. It will likely target more effective carbon pricing to curb carbon demand, the adoption of energy standards to curb fossil-fuel supply, and regulatory moves to reduce the carbon footprint of the financial system.

The second signal envisages faster growth in the supply of renewable energy. This will likely come via blended finance, based on public-private partnerships promoting green innovations that will tilt public markets towards impact investing.

The third signal envisages stepped improvements in the current reporting infrastructure. New taxonomies of climate investing are likely to come on stream. They will result in consistent definitions, reliable data and ‘apples with apples’ comparisons, duly backed by the mandatory disclosure of climate-related information from companies.

Reliable climate key performance indicators will be enforced by either regulators or investors asking for data in the shareholder filings that would be exposed to litigation in the event of greenwashing.

In equities, progress will come on the back of impact investing, as the breadth, depth and quality of data improves under regulatory pressure.

Markets will be better equipped to turn the spotlight on companies at the forefront of devising cost-effective solutions towards adaptation and mitigation, as policy aspirations are turned into outcomes.

In fixed income, green bonds are likely to remain in the vanguard of progress, as ever more sovereigns, quasi-sovereigns and listed companies use them to give a distinct green edge to their post-pandemic recovery.

In alternative investments, real estate, infrastructure and private equity are seen as well placed to capture upsides from climate change. Blended finance will dominate some of the largest projects in these three asset classes.

In conclusion, rechannelling capital towards new technologies to power a low-carbon economy needs concerted action as well as incentives.

As the aphorism goes, the best way to predict the future is to invent it. Investors can only do that if they foresee potential benefits. What they need most is policy certainty.

Without it, some fear a ‘Minsky moment’: a collapse in securities’ prices due to sudden panic at some future date as risks are allowed to build up.

Amin Rajan is CEO of CREATE-Research and a member of The 300 Club. Anthony Cowell is a senior partner, head of asset management and impact with KPMG in the Cayman Islands