By Jan RabeTowards Net Zero: COP26 and Beyond

Controversial question: is peak oil behind us or does it still lie ahead?

Those who claim that peak oil – the year when crude oil production reaches its peak – is in the past are forgetting that this is a market for non-reproducible goods. Unlike markets for reproducible good such as food or clothing, the production of finite goods remains rigid and is not particularly responsive to changes in prices (figure 1). As long as global climate policy remains unilateral and fossil-fuel producers are encouraged to increase rather than decrease production, global greenhouse gas emissions are more likely to rise than fall in the long term.

How can this be true?

The carbon leakage dilemma
Using a model based on an equilibrium price (p* in t=0), figure 2 shows why the price of fossil fuels could decline in the long run, contrary to the trend over recent months. If an alliance of ‘green’ countries pursues unilateral climate policy to reduce greenhouse gas emissions, such as by introducing CO₂ certificates or a CO₂ tax, then demand would decrease in these countries while the price would increase (to reach a temporary equilibrium at p*+x in t+1).

However, due to the nature of the market for finite goods paired with rigid supply, global aggregate demand would not decline to the same extent as demand among the group of green countries. The oil tankers of the exporting countries would simply deliver to other ports and sell the excess quantity at a lower price (p* - x). The produced quantity would thus be consumed despite restrictions in the green countries. This effect is known as the carbon-leakage dilemma.

The green paradox
Meanwhile, the producers of fossil fuels are not satisfied with lower revenues, particularly since their goods are not expected to be in high demand in the future. Furthermore, if fossil-fuel production is likely to be discontinued in the distant future, producers would have to cope with considerable write-offs. And we expect revenue from alternative sources would not fully compensate for carbon-related revenue shortfalls.

Therefore, the incentive for producers to further increase the supply of fossil fuels instead of reducing it is high. This leads to an even lower equilibrium price (p** in t+2). This supply-side phenomenon is known as the green paradox. In other words, unilateral climate policy subsidises and increases greenhouse gas emissions, for example in economies that are trying to evade their voluntary commitments under the Paris Agreement. In fact, outside the EU, only 32 of the 195 countries have presented quantifiable greenhouse gas reduction targets so far.

What economic incentives are needed?
According to Nobel Prize winner William Nordhaus, the solution to this could be that the demand side establishes an economic cartel that channels fossil-fuel deliveries. This should be combined with a global CO₂ certificate-trading scheme to overcome the carbon-leakage dilemma. To counteract the green paradox, a sufficient number of countries, ideally the G20 (responsible for 75% of global trading and 80% of world GDP), would come together to form a ‘climate club’.

In addition to working towards a climate-neutral footprint, they would ban third-party trading of goods. Only those committed to the club’s goals would be included in any trades. This could be supplemented by a withholding tax on fossil fuels to make the capital investment that comes from carbon-related revenues unattractive. In the absence of such an initiative, it must be assumed that fossil-fuel production will increase in the long term and prices will decline.

Escaping the climate trap
The challenge now is to respond to such long-term effects with tactical positioning. This is the only way to strengthen risk-return ratios throughout the economic cycle. One way to achieve this is with stock picking that takes the attractiveness of the dividend and sustainability aspects into account.

• Which stocks should be avoided?
Should fossil-fuel prices decline in the long term, this would primarily affect capital-intensive producers in the energy and basic materials sectors, as their sales are sensitive to fluctuating selling prices (figure 3). High asset write-downs would also hit companies from sectors that fail to adapt quickly. Likewise, it is doubtful that sufficient capital would be available to keep up dividend payments and satisfy income-focused investment funds. The assumption is that capital moves faster than companies are able to transition. Therefore, contrary to recent trends, we do not expect long-term recovery in these sectors. 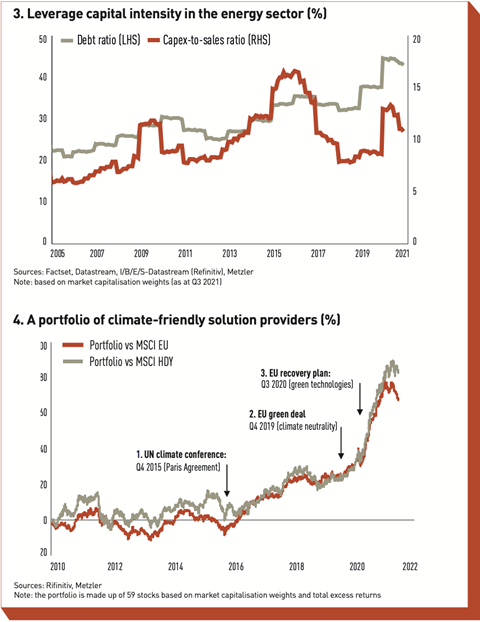 Aside from CO₂-intense business models, banks would also be negatively affected. Not only would banks have to tediously realign their greenhouse gas-intensive investment portfolios and loan books, they would also bear the burden when their investors – especially institutional investors, sovereigns and central banks – start to avoid their securities more and more because they themselves have to position themselves as climate friendly.

This would make it more expensive for banks to obtain refinancing which, in turn, would have a negative impact on funding costs as well as on dividends. The aggregate global warming potential, which takes Scope 1-3 CO₂ equivalents into account, shows how acute this risk already is for bank stocks in the European equity universe.

Banks have the second-highest global warming potential (5.1°C), with the energy sector in first place (6.2°C), and the basic materials sector in third (4.9°C). This measure already takes the greenhouse gas emission reduction targets set by management into account. However, the targets set by the banks are not particularly ambitious and without taking them into account, the figure would be marginally higher at 5.2°C.

• Which stocks are worth investing in?
For some companies, declining energy prices can have a positive impact on sales. If household budgets are relieved by lower energy prices and savings rates remain stable, spending on consumption and investment increases. Companies can also benefit on the cost side if energy accounts for a significant share of total costs. Sectors with sales sensitive to fluctuating energy prices, where companies benefit in terms of either sales or costs and can outperform the market in terms of global warming potential, include real estate, insurance, and household goods. 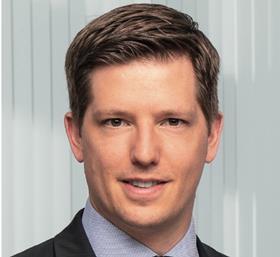 At the individual stock level, companies offering solutions in the areas of energy efficiency, renewable energies, electromobility, water and biofuels, building refurbishment, and carbon capture and storage (CCS) are of particular interest. Currently, the EU meets 75% of its power needs with fossil fuels and these are to be replaced with climate-friendly technologies. For example, industry experts estimate that the EU alone would need to invest about €1trn per year to be climate-neutral by 2050. This sum represents about a quarter of all EU investments. Of this, 80% would be diverted investments that would normally fund CO₂-intensive technologies. This could reduce primary energy demand for fossil fuels by 90% by 2050.

The gross excess return of a portfolio of 59 European stocks that all offer climate-friendly solutions and are therefore in high demand by investors is driven primarily by political events, such as the 2015 UN Climate Change Conference, the 2019 EU Green Deal, and the 2020 EU Recovery Plan (figure 4).

The bottom line: peak oil versus net zero
Price developments on the capital markets are still in line with the narrative of those who are convinced that climate neutrality can be achieved by implementing unilateral political measures. However, there is a growing risk that global greenhouse gas emissions could continue to rise instead of decline following the COVID-19 pandemic.

As long as climate policies are unilaterally tightened, this will not change. The peak-oil scenario is thus shifting further into the future. This makes it necessary to rethink the methods currently being used to pursue the goal of a climate-neutral economy.