This article encourages asset owners and asset managers committed to humanity’s race-to-zero to focus on real-world greenhouse-gas (GHG) emissions reduction as the primary purpose of portfolio decarbonisation. It follows the article ‘Long term matters: What kind of decarbonisation matters most?’ in January’s IPE magazine.

As illustrated in figure 1, systemic interventions that complement and reinforce another in enabling and accelerating portfolio decarbonisation include (but are not limited to):

• Mandated phase-outs and substitutions of carbon-intensive goods and services produced by high-carbon assets (and operations), such as through stringent low-carbon standards and replacement mandates as suggested by Saul Griffith in Rewiring America (2020);

• Establishing forceful stewardship duties and liabilities for company directors to protect the planet’s long-term habitability, corresponding with Robert Hinkley’s Code for Corporate Citizenship, and the recently proposed legal definition of ‘ecocide’ as an international crime. This also includes investors’ fiduciary duties, for instance through work on a legal framework for impact by PRI and others;

• Transformative green financial market regulation, comparable to suggestions provided by The Great Democracy Initiative or PositiveMoney, for example, which would take the European Commission Action Plan for Sustainable Growth even further towards real-world emission reductions;

• An effective carbon-pricing scheme in combination with a carbon-border adjustment mechanism (as suggested by the EU) to prevent carbon leakage, and a redistribution of carbon-pricing revenues as a climate income to consumer households (as advocated by the Citizen’s Climate lobby, for example) in order to ensure sustained public support even in the face of steep carbon price increases;

• Reforming fossil-fuel subsidies and shifting them towards climate solutions and a just transition;

• Mandated retirements of high-carbon assets and operations, including operating coal-power plants as well as state-owned national oil and gas companies. This will require major global players, such as the US, EU and China, to double down on international co-operation and financial transition support (eg, through a sovereign debt relief in return for national fossil-fuel phase-outs). Fixed-income investors and sovereign bond holders should also engage with governments and central banks to this end, as suggested by UN Principles for Responsible Investing.

Portfolio decarbonisation measures
Based on the constraints and incentives provided by systemic interventions, investors can decarbonise their portfolios through five typical measures:

• Increased low-(negative)-carbon allocations: asset managers can increase their allocations into different low-(negative)-carbon assets that are already consistent with a Paris-aligned emissions pathway. Climate solutions directly or indirectly contribute to displacing high-carbon assets that are operational (or would have become operational), which results in avoided real-world emissions.

Some assets, such as nature-based solutions, can deliver net-negative carbon emissions by removing carbon from the atmosphere, provided the emissions removal has not already been used for carbon offsetting. However, there is also a set of low-carbon assets that have neither a particularly positive or negative impact on real-world emissions. Simply increasing the allocation in such assets improves the portfolio’s carbon footprint but does not have a positive climate impact;

• Write-offs or early retirement of high-carbon assets: for real-world emissions to decline it is critical that plans for building new high-carbon assets are cancelled and that existing high-carbon assets are prematurely written off and retired (sterilised) as early as possible. This process could be facilitated by instruments such as the coal retirement mechanism suggested by Donald Kanak of Prudential (see blended finance case study in this report). However, in the absence of strong regulatory mandates and institutional pressure, premature write-offs are generally unlikely to occur on a voluntary basis.

• Asset (company) decarbonisation: a significant potential for additional real-world emissions reductions can be unlocked by forcefully bending the GHG emissions trajectories of high-carbon assets that are not yet Paris-aligned into a proper science-based decarbonisation pathway.

Alternatively, an investor can increase allocations to high-carbon assets that are already Paris-aligned, although in this case emissions reductions are not additional. In either case, rigorous monitoring and management of decarbonisation performance is indispensable, especially when taking into account that a majority of corporate transformation efforts tend to fail and that many net-zero pledges by high-carbon emitters have been criticised for being unreliable and misleading. 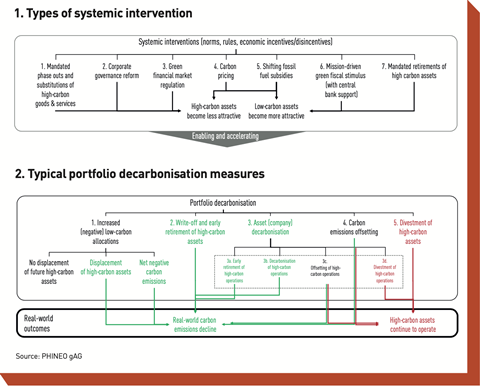 • Carbon offsetting: investors and companies can ‘neutralise’ hard-to-abate real-world emissions through carbon offsets, which presupposes that the criterion of additionality is met (ie, the underlying carbon-offset projects would not have been funded otherwise). While the portfolio’s carbon footprint improves, neutralised assets continue to produce real-world emissions. In general, carbon-offset projects play an important role in the fight against the climate crisis and require sufficient funding. But they can also represent a risky undertaking due to uncertainties in terms of additionality, double counting, permanence, and unintended social/ecological side-effects, especially in the absence of robust verification;

• Divestment: just as investors can divest high-carbon assets to decarbonise and reduce their exposure to transition risk, companies can divest high-carbon operations (such as business units, facilities or machinery). However, these measures will not translate into a real-world emissions impact if the sold assets/operations continue to operate under new ownership. A pragmatic outcome could be realised if divestments of high-carbon assets were to be aggregated in ‘climate bad banks’ with the mandate to wind down these toxic assets as soon as possible. 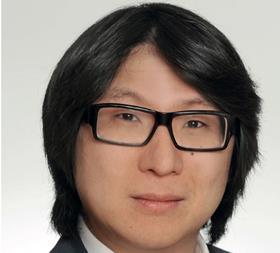 Young-jin Choi: “easier to decarbonise an asset portfolio than to transform real-world systems”

Figure 2 summarises how different portfolio decarbonisation measures could result into real-world emissions reductions. The framework shows that it is easier to decarbonise an asset portfolio than to transform real-world systems: as long as high-carbon assets keep operating as usual, the work remains undone This is why systemic interventions are so critical to win the race to zero.

To this end, as suggested by the social and environmental finance specialist Joel Moreland, investors need to lobby regulators and legislators for systemic interventions (alongside the Inevitable Policy Response project and Preventable Surprises) and help limit the negative influence of opposed corporate lobbying and misinformation.

Since every asset owner/manager is also a corporate citizen with a vital interest in global long-term stability and sustainable prosperity, it is well within their ethical and professional duty to collectively address the broader systemic risks associated with the climate crisis, as if they were ‘universal owners’, because – in one way or another – we all are.

Young-jin Choi is head of research, impact investing, at PHINEO gAG. With thanks to Raj Thamotheram and Zsolt Lengyel